Amidst all the doubts and uncertainties with the increasing risks of the Covid Pandemic the 101st Race for the LIPTON CUP – 101 years after that first race was sailed – was sailed yesterday in near perfect conditions.

After a week of very benign conditions with days of little or no wind on Saturday we had breeze with a 10 – 15 knot, at times gusting 20 and varying between N & NE and with a strong out going tide there was plenty of on the wind, tight reaching and a spinnaker run back up harbour. (Today the winds are 30 knots plus – gusting 45 knots!)

Some regular crews were depleted because of Covid infections. Permitted Crew numbers was amended to allow a minimum of 5 crews & a maximum of 6. (Originally permitted crew numbers were 5 plus the Fair Play man who was not permitted to crew. When the Fair Play man was dropped in 1979 Crew numbers were raised to 6.) Some boats could not make the start line because of the delays with maintenance – due to Covid. It has been a season of non-events due to restrictions and lock downs – the pre-race breakfast and after race celebrations were limited but the LIPTON CUP Race 101 was sailed and the trophies were presented.

Paul Meyer was this this year’s Race Officer with the responsibility of setting the course and making the decisions, Janet Watkins joined him aboard as time keeper, recorder and after a number of years as RO enjoyed not having to make those RM calls, Dave Nigh was the host and skipper aboard his launch Amazon with Tania Nigh assisting. Tania would have been a starter on Martanza but the boat was still on the hard awaiting maintenance and Paul also had a probable starter behind schedule. Paul, Tania, Dave and I have all crewed on mullet boats for a number of yearsand often in Lipton Cup Races!

Kevin Gun was again the skipper of Watchman with Antony Collett in charge of the RIB – thanks to you and your crews.

A close start with two windward/leewards across the harbour in a freshening northerly. Tere Kanae exonerated her minor mishap on the start line with a penalty turn. Thanks TK. Orion II was in control and away leading after the first beat, Valeria sailing with a patchwork crew after several covid withdrawals, struggled with her kite as she careered through the RNZYS training fleet on her first down wind leg. The race down harbour to Bastion Buoy off Tamaki was a long and a short beat with Orion II rounding 3 minutes ahead of Valeria with Rangimanu just 30 seconds behind. From there it was on the wind to Rangitoto Buoy near the SW corner of Rangitoto Island, a lead to North Head and another windward leg to Salt Works on the NW shores of Rangi’. At this stage Orion had built her lead to 8 minutes, Valeria was 3 minutes ahead of Rangimanu, Tere Kanae which had been 5 minutes behind at Rangi’ Buoy was struggling. Komuri, sailing with a smaller mainsail and not using a spinnaker always looked comfortable following the fleet.

After a short windward/leeward off Westhaven, Orion led the fleet home by 12 Minutes. Valeria was second, flying a smaller yellow kite and Rangi Manu was third. Tere Kanae had with drawn and returned safely to Westhaven and Komuri sailed well in the conditions, fourth over the line and a win on handicap.

This was the 11th win for Orion II and for Martin Robertson and the 12th win for the Ponsonby Cruising Club. CONGRATULATIONS TO MARTIN AND HIS CREW - Orsa Levent, Grant Ewing, Reg Sparrey, Graham Andrew, Chris Ward and Martin!

AN EXCITING RACE WITH LOTS OF LEAD CHANGES !!!

The 1st of May 2021, the 100th Race for the Interclub Challenge Trophy, the LIPTON CUP, was an amazing day and an awesome event celebrating 100 years of racing annually for the same trophy in the same boats under the same rules and over similar harbour courses for 100 years.

History was on display in the club house with photos, bunting and memorabilia of past years with the mainsail of the most successful mullet boat, L11 Tamariki, hung in the club as a fitting backdrop.

Race Officer Janet Watkins delivering the briefing to the skippers

The day dawned with a clear sunrise East and a few clouds over the Western hills. The forecast was good – light winds and fine! After the traditional early breakfast for the Race Management team and the sailors it was time to review the course planned on Friday’s forecast. Saturday 5-10 knots from the SE to SW against strong outgoing tides (High tide 10.38) to be printed and signed for at the briefing, another part of the long tradition. For the Race Officer setting a course at 8.00am using the fixed harbour marks for what the weather in Auckland may do after mid-day is an “educated guess”! Because of the variable wind strengths, the course was set with 3 possible options for a shortened course off the PCC Club house at Westhaven.

On the marina the final safety checks were completed by the Club, spinnakers were being bagged, sheets coiled, the final checks were being made of patrol boats and race management equipment, the lunches were delivered, the countdown was underway!!

On the harbour with 5–7 knots the course was set at 160⁰ for an on the wind start across the harbour to a windward mark. Yachts and support boats were milling around – looking good!

Astern of us a protected mooring area restricted the length of the beat to the first mark! Wind shift!! Now 140⁰. Top mark & start line reset to give more sea room astern and we were into the start sequence for the “Gaffers” – three 26 foot H-class and one 22 foot L-class. Clear start at 10.50. Not a classic race start with one boat struggling to peak his gaff halyard! This course went to the windward laid mark and then down the harbour on a similar course to the L-class but with 1 shorter leg.

10.55 L-class warning signal – light but sailable – course almost true and what breeze there was had gone! AP up! Luckily the tide was just on the turn but still slack while the yachts waited. 11.05 AP down and the fleet was underway – a clear start on a true line and beat to the windward top mark! Their course started with windward leewards, three times round the top mark then off down the harbour with the ebbing tide to No.15 - Bean Rock Buoy near the entrance. It was a tight reach to close hauled. Some boats sailed the southern side and Tamarau, who was third when they rounded the top mark, gained on the lifts along the northern shore to be first around No. 15 with a lead of 2 minutes over Orion II and Tamatea. The rest of the fleet were not far behind and ahead was the first of the H-class.

No. 8 next mark, 2.4 miles down the Rangitoto Channel was almost a spinnaker run! In the patchy air some carried their kite or a leader part of the way but it was slow going even with the ebbing tide. And then there was nothing! A fleet of boats on a glassy sea! Not good for the Race Officer’s nerves!! Rounding No.8, Tamarau was still in the lead but Orion II was only 30 seconds behind.

Tamarau in the lead with Orion close behind

As the leading boats rounded the mark and headed back to No.15, slowly, in the gentle zephyr the rest of the fleet drifted down on the now strong outgoing tide to compress the fleet and, as the last boat rounded the mark, the breeze was back and the chase was on!

At No.15 Tamarau again had a lead of nearly 2 minutes with Orion and Tamatea 18 seconds apart closely followed by Limited Edition. Then it was a mile back down harbour to No. 7, sometimes a spinnaker, sometimes a leader and sometimes just the jib, a jibe round No. 7 and the 4.2 mile run up harbour to No.1 buoy off the Club house against the tide! The fleet split and who does the leader cover! Tamarau led Orion and Tamatea up the southern side while Limited Edition who was in 4th place, led Valeria, Rangi Manu and Tere Kanae along the North Shore.

On the left Tamarau leading Orion II and Tamatea

Limited Edition was going well in a steady breeze while those on the city side were feeling the effects of the tall city buildings. Tamarau was still leading, Limited Edition was converging from across the harbour! Tamarau’s wind deserted her and Orion snuck through to take the lead – for a short while!! Rounding No.1 it was Limited Edition in the lead by about 2 minutes. From there it was a tight reach of 0.8 miles to No.2, a spinnaker run to No 1, back round No. 2 and a race to the finish.

Limited Edition led all the way only to be overtaken 11 seconds short of the line by Orion II who got the gun!! There were two very disappointed crews who had led for so long and Martin sailing Orion II, representing the Ponsonby Cruising Club, had his 10th win of the Lipton Cup.

This is how close the finish was !!!

But the race hadn’t finished there! Five other crews were battling it out on those three short legs.

After four and a half hours racing seven boats finished within 8 minutes with the last two within sight. For all the spectators on shore and for the sailors it was a great and exciting finish to the 100th race for the Lipton Cup.

The Gaffers fleet, which sailed a shorter course down the harbour and did not sail the last 2 laps to No. 2, arrived back at Westhaven just ahead of the L class in time to watch the finish of the great race just as pre-planned! Tangaroa, the God of the sea, was with us!

The race had its moments, its stacking breezes and its mill pond calms! There were times when I wondered if I needed to shorten to get a finish and then the puffs returned but those last 4 short legs off Westhaven in a nice steady breeze showed off the L-class Mullet Boats at their Classic Best.

Peter Montgomery, the Ponsonby Cruising Club’s Patron did us the honour of presenting the trophies and the prizes that our sponsors generously donated. I am sure Sir Thomas Lipton would have enjoyed the event – Thank You Sir Thomas!

On March 20th 2021 the 100th Interclub Challenge Race for the Lipton Cup will be sailed on the Waitemata Harbour in Auckland again hosted by the Ponsonby Cruising Club and again the fleet will be the same class of boats, sailing under the same rules as was first sailed in 1922. 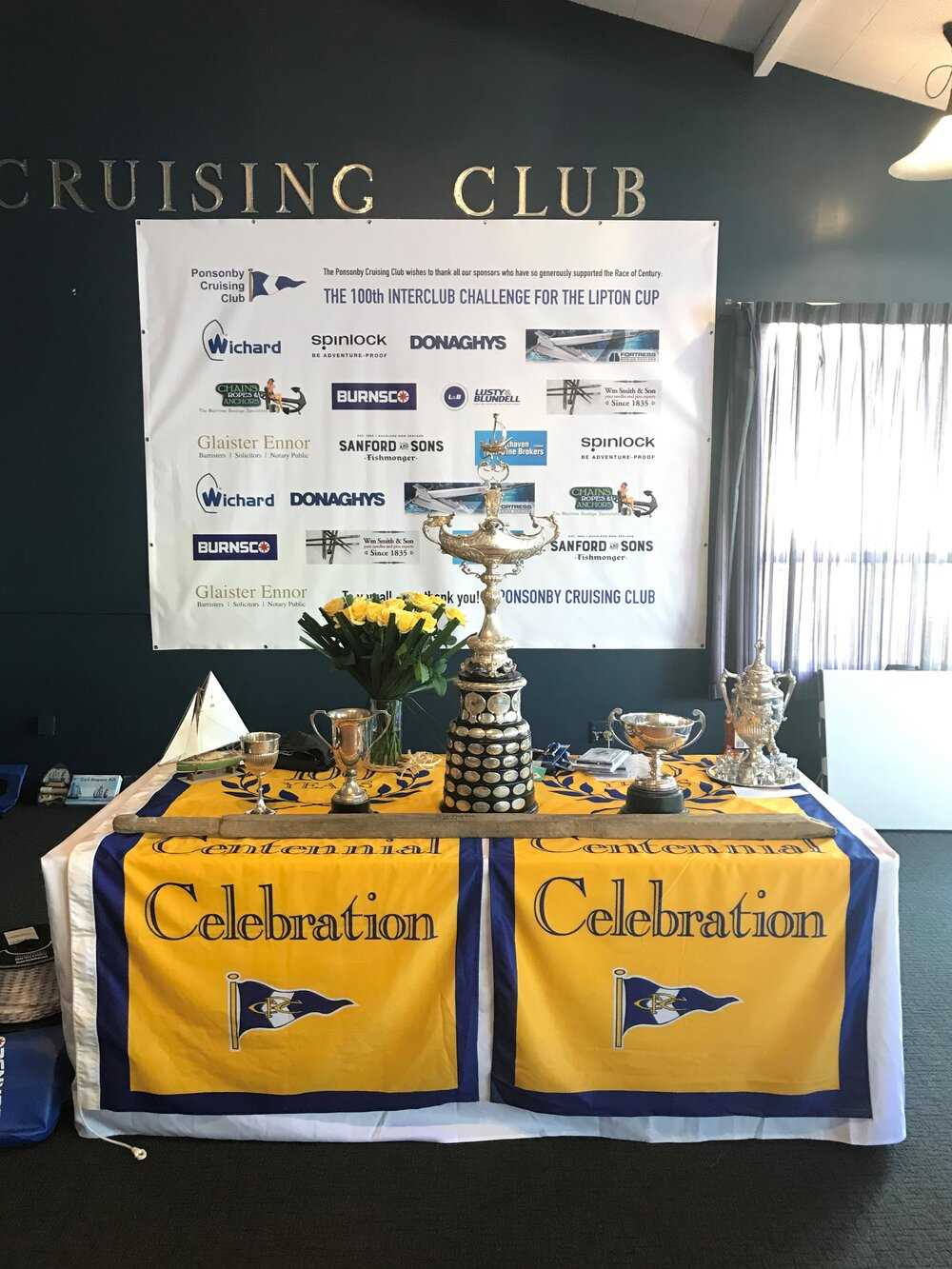 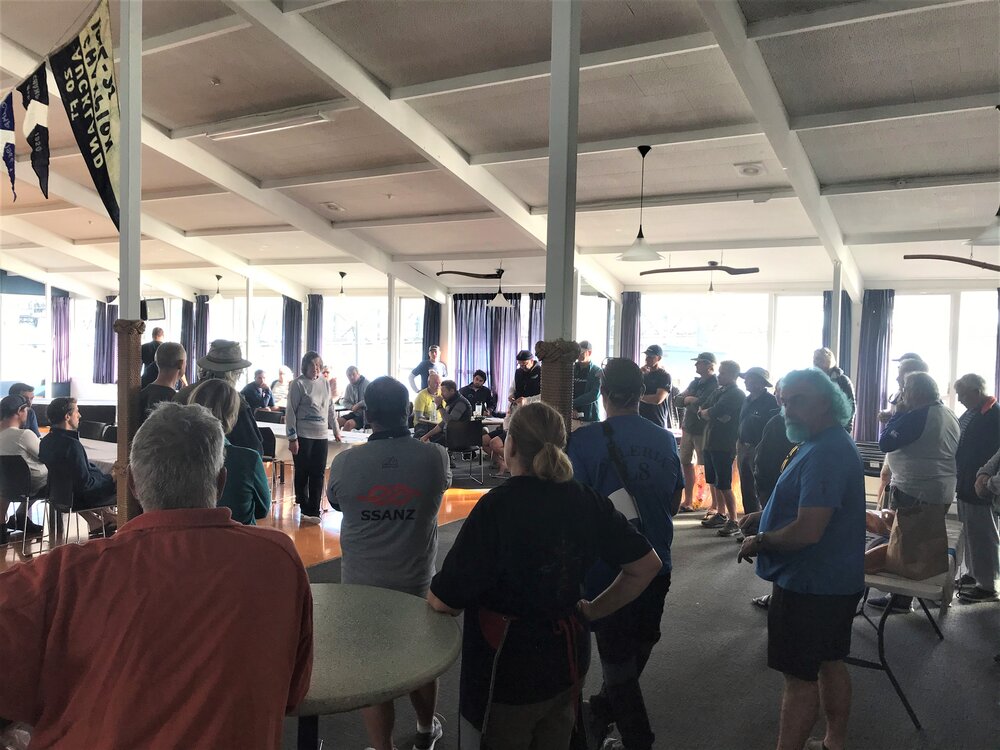 Race Officer Janet Watkins delivering the briefing to the skippers 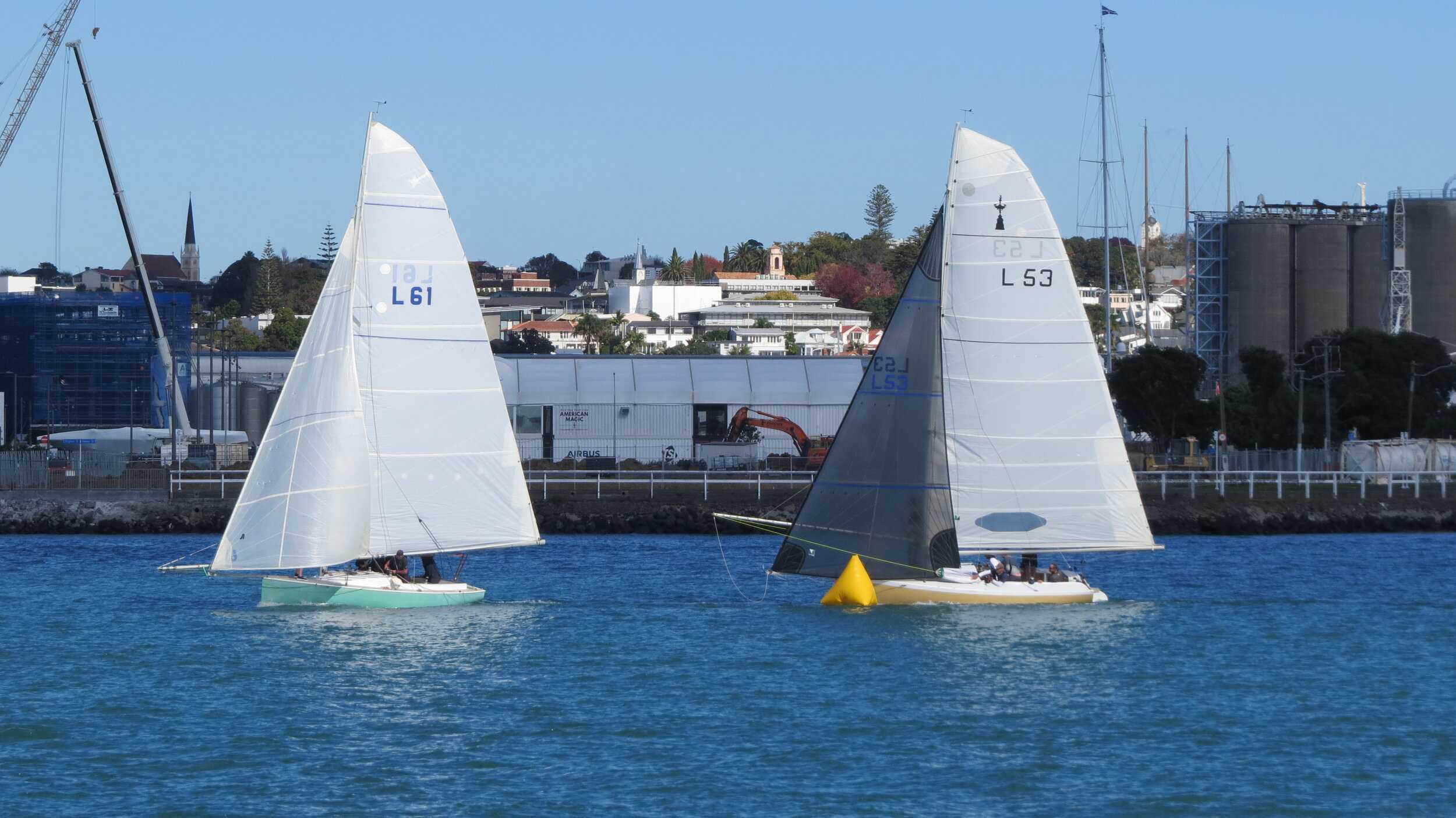 Tamarau in the lead with Orion close behind 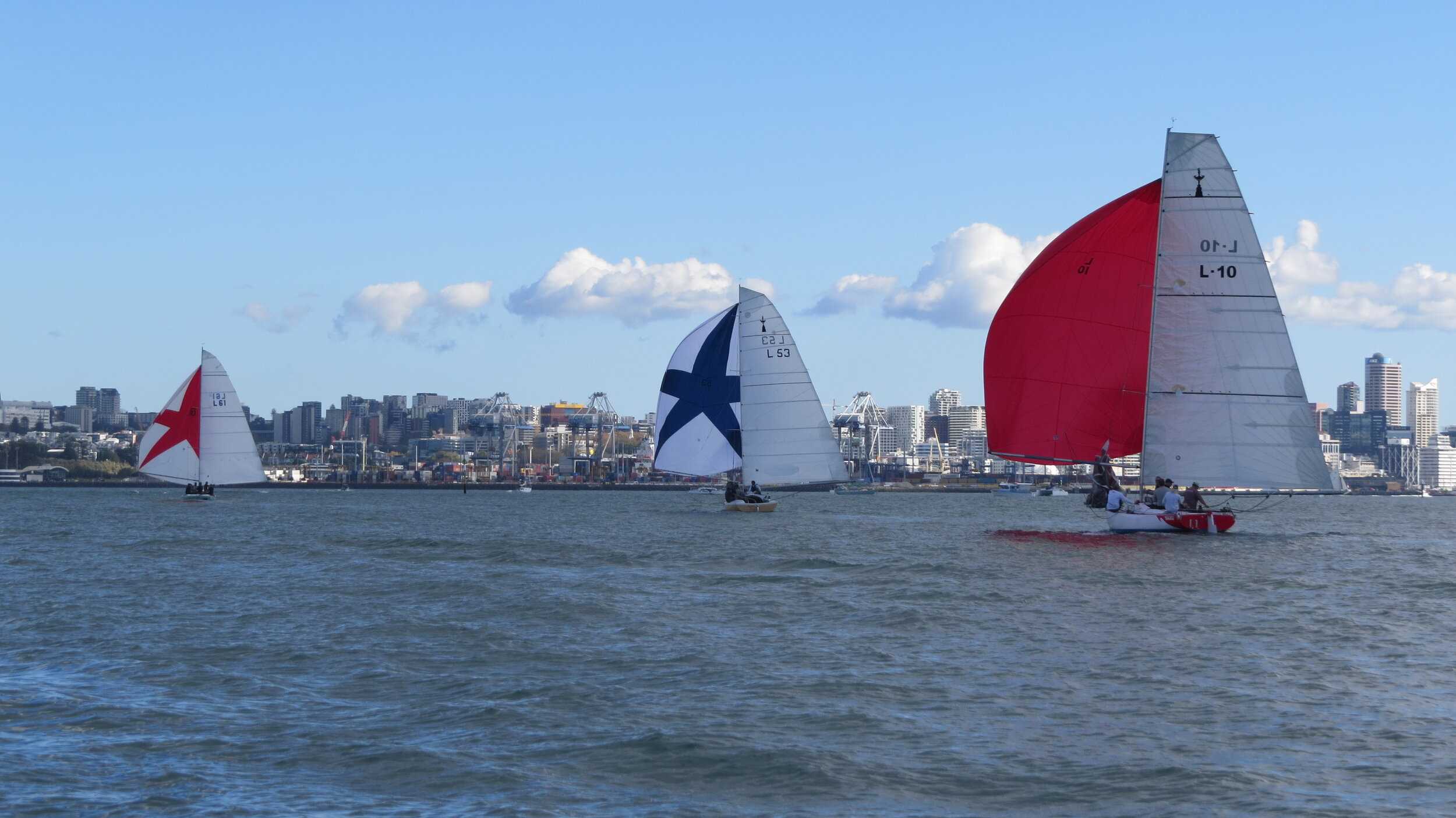 On the left Tamarau leading Orion II and Tamatea 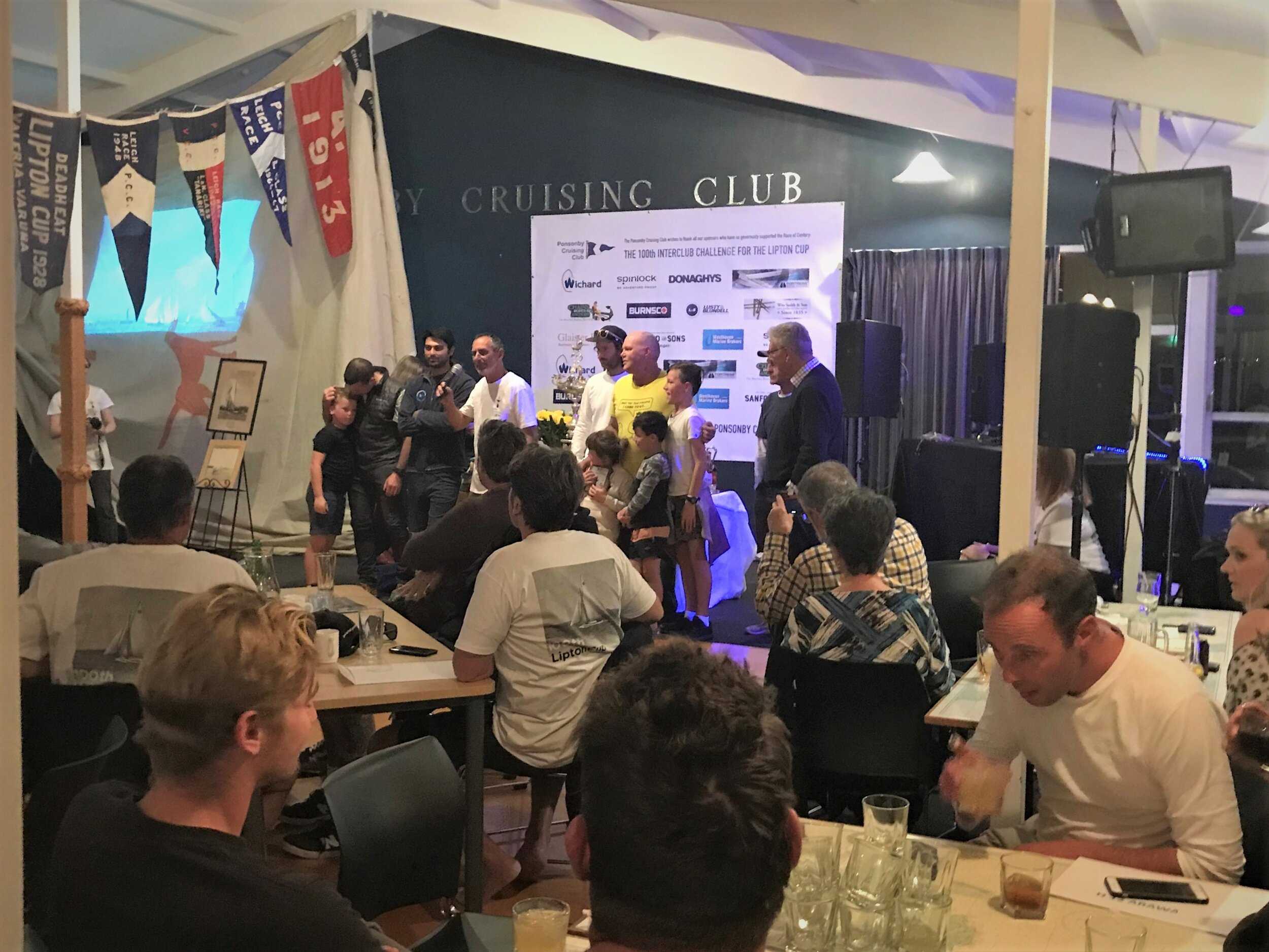 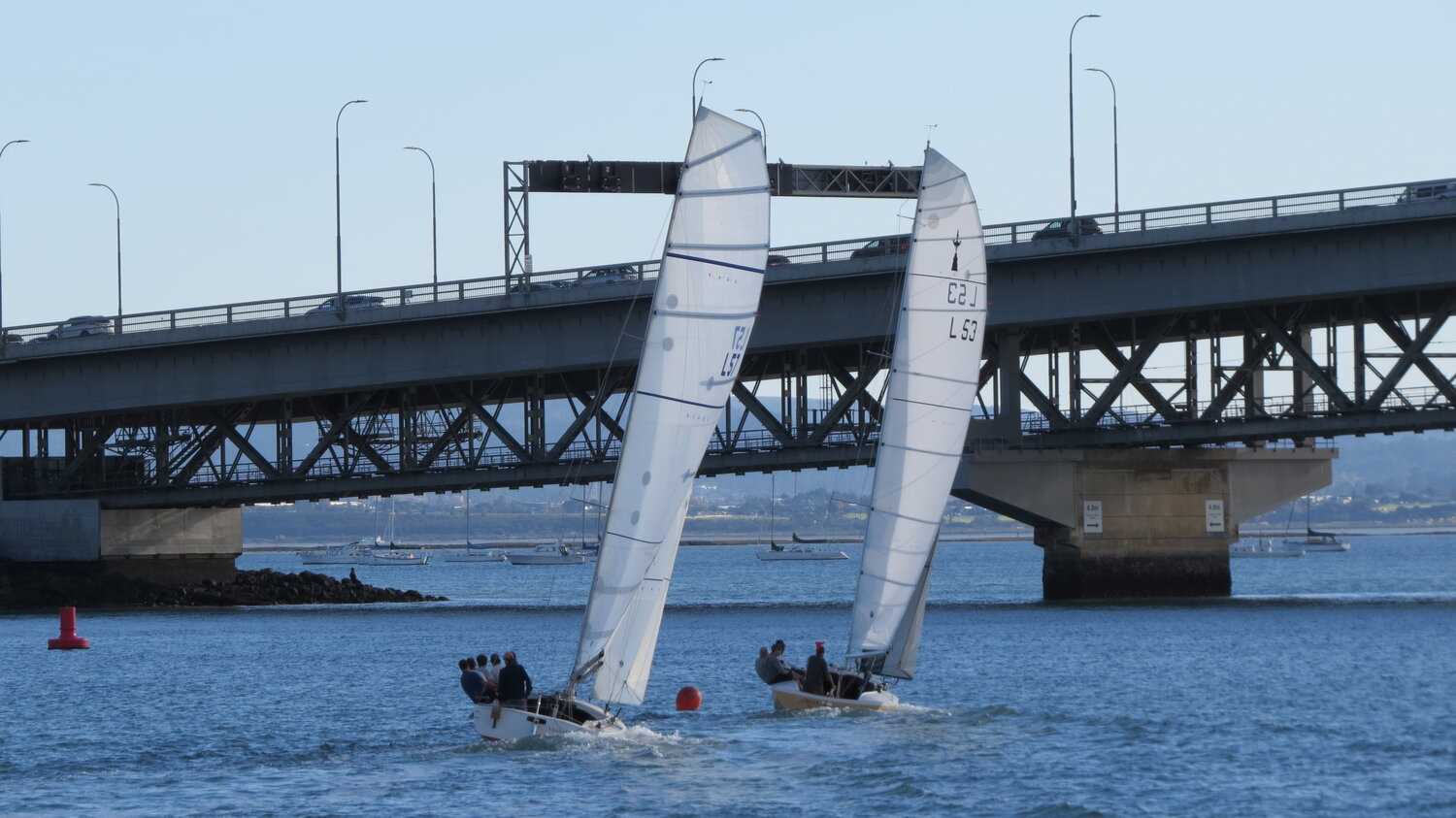 This is how close the finish was !!! Orion II has just overtaken Limited Edition